Tytianna: Doing What I Had to Do for College 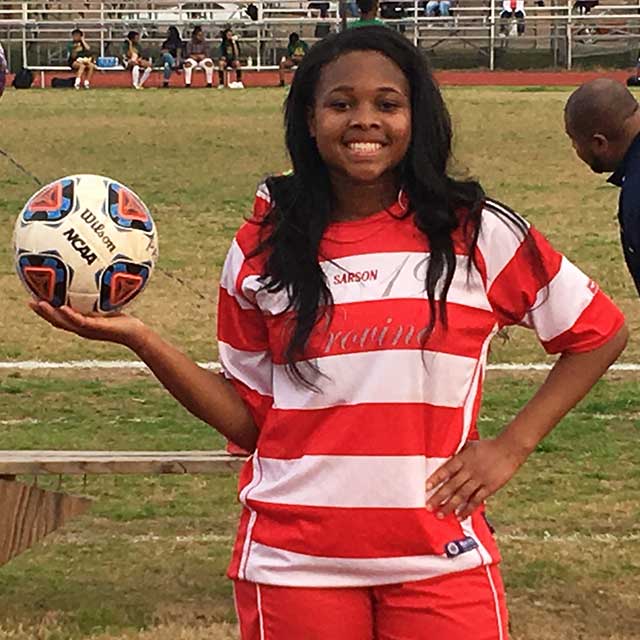 Takeaway: Help from her high school counselor and a Get2College workshop enabled Tytianna to complete her FAFSA and resolve issues with parental guardianship.

“I like trying new things. I used to play basketball, but one day Mr. Freeman — he’s my coach and my school counselor — asked me if I’d ever thought about playing soccer,” Tytianna recalls.

“I went to tryouts and I liked it. Everybody says it’s a lot of running, but it’s not, because you have a team where everyone has a part to play. I’m a defender.”

Besides playing soccer, Tytianna also has a job. “I work at a fast food restaurant taking the food out to people’s cars. It’s a low wage, but the tips add up. Working with customers has taught me a lot of patience.”

Tytianna wasn’t sure where to start though. “I didn’t know anything about financial aid or FAFSA. One student in my class said something about it and I was like, ‘What is that?’”

Running into problems without a legal guardian

In senior year, Tytianna learned about financial aid. “My teacher started explaining financial aid,” she says. “I was new to it, but all I heard was Pell Grant and that it’d help pay for college. I was like, ‘Okay, I’m down for it.’”

But Tytianna immediately ran into a problem.

“My mom passed away four years ago,” she explains. “It was hard to fill out my FAFSA because you have to have your parents W-2 tax forms and all that stuff.”

“Even though I live with my uncle, he’s not my legal guardian. After my mom passed, nobody went to court and claimed guardianship of me.”

Tytianna talked to her counselor, Mr. Freeman. “He made some calls, and then we went to the school’s office to talk to one of the office workers. She told me they had to do some paperwork that would list me as homeless in my school records to be able to do my FAFSA.” That way, Tytianna wouldn’t have to worry about getting information about parents that she couldn’t get.

“At first, I thought it was going to be too much work. But I didn’t really have to do much,” she recalls. The school’s office staff prepared the paperwork and had it sent to an office http://healthblog247.com/using-phentermine-weight-loss/ downtown.

“I knew it was what I had to do. The office worker and my counselor understood where I was coming from. Once they were able to get my status updated in the system, they let me know so I could do my FAFSA.”

Tytianna went to Get2College for help filling out her FAFSA. “It was easy. I filled it out with one of the counselors there,” she remembers.

“When I found out I was getting financial aid, I was like, ‘Okay, that is out of the way.’ One more step out of the way for me to go to college.”

“It took about 20 or 30 minutes. Basically, all I had to do was put in my name, my Social Security number, birth date, address and school — basic information. And I had to put down which schools I wanted my FAFSA information sent to.”

“Everybody there was nice and willing to help me get my FAFSA done so I could go to college. I knew they weren’t going to turn me away,” Tytianna says.

“When I found out I was getting financial aid, I was like, ‘Okay, that is out of the way.’ One more step out of the way for me to go to college.”

Tytianna also found out that the college she would be attending was giving her a soccer scholarship.

“Everybody in my family is very excited. I’m not the first to go to college, but this is the first time somebody got a soccer scholarship,” she says.

Tytianna’s advice: You’ll make it through it

“If you don’t have a parent or your parent is deceased then it makes it hard, but I made it through it,” she says.

“Other than that, if you have your parents, and they have their W-2s, then you are good to go. And you’d better fill out that FAFSA if your parents don’t have money to be spending on college. FAFSA is not for your grades — it is for how much income is coming to your household.”

“This is the next step in my life. High school was one step and college is the next, so I can do better in life.”

Tytianna will be attending Southwest Mississippi Community College and will play soccer while in school. She plans to study nursing because her mom was a nurse.