Katie: Deciding If College Is Worth It 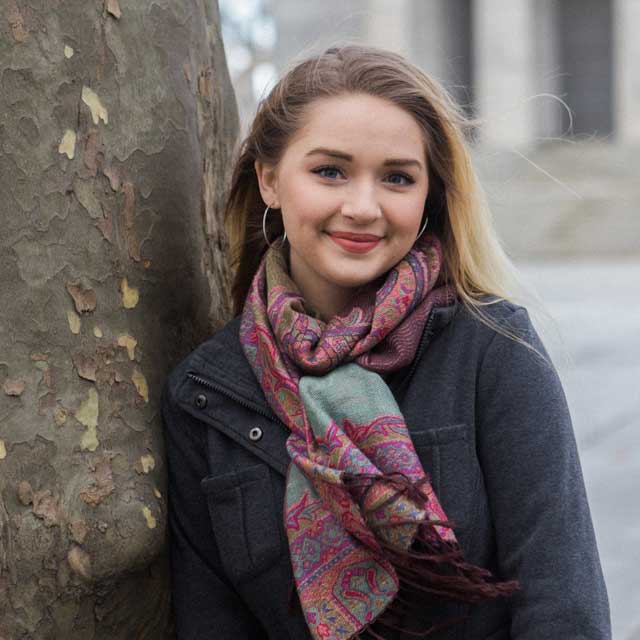 Takeaway: Katie's advice is don't assume you won't qualify for anything. A FAFSA workshop at her school helped with the form completion process.

“I really like working. I work at a sandwich shop. It’s kind of like Subway, but not a chain. Every morning, I get up and go slice all the vegetables and meat, then go to school. I come back after school and work more,” says Katie.

Besides the fact that she likes it, Katie works because she doesn’t get financial support from her parents. “When I was 16, I went through the court system and ended up being placed in one of my sister’s custody,” she recalls.

“Working makes me feel good because I’m supporting myself.”

But Katie started stressing out about her plans after high school. “My sister, who I live with, is going to move after I graduate. I’m going to be completely on my own.”

How her sandwich shop coworkers inspired her

Katie wasn’t sure she could afford college — or if college was even a good idea. “My sisters told me you don’t always have to go to college to be successful.”

“The sister I live with went to college for six years. It was a struggle and she never got her degree. She has her dream job at a big company, but she has six years of student loan debt. My other sister went to college for one semester and dropped out. She makes good money as a photographer.”

It was her sandwich shop coworkers that cemented her decision to go to college.

“I was talking to them about trying to decide what to do next. One coworker said, ‘It is good for your sisters that they didn’t get a college degree and are doing well, but it’s not always easy. You get to a point where everyone else has a degree and you can’t compete.’ He told me he would get a degree if he could do it all over again.”

“I have coworkers in their 40s. Working at the sandwich shop is not a bad job, but it’s not what I want to be doing in my 40s or 50s. I realized not going to college would really limit my options.”

Once Katie decided she wanted to go to college, she had to figure out how to pay for it.

Getting help with the FAFSA

“I went to a FAFSA workshop at my school. A woman named Judy Kee Smith from the West Virginia Higher Education Policy Commission came and explained the FAFSA to us. I remember her name because she gave me her business card and I’ve kept it.”

“She was so nice. She helped me fill out the FAFSA. If I didn’t understand a question, she phrased it a way that wasn’t hard to understand. We did it after school on a school computer.”

Because Katie was in her sister’s custody, she didn’t have to fill in her parent’s income information. “The FAFSA automatically put my family’s Estimated Financial Contribution as zero. I just had to put in my own information, like my Social Security number.”

“I had a lot of classmates say they weren’t going to fill out the FAFSA because they thought they wouldn’t qualify for anything. Fill it out anyway. It might be a little stressful, but it is not nearly as bad as people make it out to be.”

“In my situation, I didn’t even think I was going to be able to pay for college at all. I’m on my own so I was going to pay out of pocket no matter what I chose to do, but, because I filled out the FAFSA, I got these grants and scholarships.”

“I’m even going to a bigger college than I thought. I had just assumed it was too expensive for me.”

“I am thankful I decided to dig deeper into financial aid and fill out the FAFSA, and for the woman who helped me. Without her, I don’t think I’d be going to college.”

Katie will be attending West Virginia University and hasn’t declared a major. Because she learned Spanish in high school, she hopes to study abroad in Costa Rica.