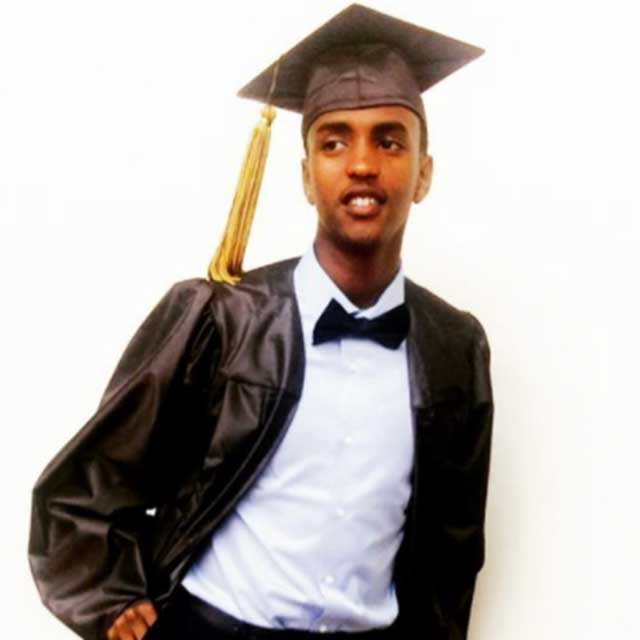 Takeaway: Rashid's family moved to the U.S. to escape the civil war in Kenya. Learning about the FAFSA from an I Know I Can counselor gave him options on how pay for college.

“On my first day of school in the United States, the teacher gave us all an assignment,” Rashid recalls. “In Kenya, you don’t call teachers by their last name — you call them ‘teacher.’ So when I needed help I raised my hand and said, ‘Teacher, teacher.’”

“People started laughing at me,” he says.

School was a difficult adjustment for Rashid, who came to the U.S. halfway through high school.

“My accent was different. It was hard for me to adapt. But six months later, I joined the school’s soccer team. I’ve been playing soccer since I was 8 years old. I started adapting to the culture and making friends.”

It was tragedy that spurred his family to migrate. “My father died in the civil war in Kenya. My mom, three younger brothers and sisters and I came to the United States so we could get a better education.”

“I’m facing a lot of challenges,” explains Rashid. It’s a struggle for his mom, who works at a local warehouse, to work while taking care of him and his siblings. “I need to try my best to make money to help my family and pay my bills.”

Figuring out how college and financial aid works in the U.S.

It was difficult to figure out how college works, especially in a new country. “I will be the first in my family to attend college,” says Rashid.

“In my senior year, I hadn’t filled out any college applications. I didn’t do my FAFSA. All the students were talking about that stuff, but I didn’t know about it.”

“One day, all the seniors were called into the auditorium and I met a lady named Ms. Clemens from I Know I Can. I said, ‘Hey, Ms. Clemens, what is FAFSA?’ She told me to come to her office at the school, so I did.”

“I asked, ‘How does FAFSA help? What does it do?’ Another question I had was if the money from it was free or if I had to pay it back. She told me that some of the money was free, so I was a little bit excited. Because I come from a low-income family, I can’t pay for college by myself.”

Ms. Clemens gave Rashid a list of things he needed to gather to fill out the FAFSA, which included his mom’s income.

Getting the information he needed from his mom

When Rashid asked his mom for her income information, she had questions of her own.

“I had to include my mom’s income when she worked at a salon in Kenya. They helped me convert it to U.S. dollars for the FAFSA.”

“She asked me, ‘Why do you need it? What is it for?’ I started explaining that the FAFSA will help me pay for college since we can’t pay the college money. Then, she told me it was okay.”

But it wasn’t that simple. “I also had to include her former income, but that was when she worked at a salon in Kenya. Ms. Clemens helped me convert it to U.S. dollars so I could put the number in the FAFSA.”

Rashid started filling out the FAFSA himself, but found he needed help. “It was confusing. I asked Ms. Clemens to help me. We finished everything together. Other people were finishing the FAFSA in one day, but it took me two days to finish.”

Looking back, Rashid says it was worth it. “In the middle of the form, I was thinking, this is taking too long. But then I was thinking, who is going to pay for college? That got me to keep going.”

“I just want to say one thing: have a positive mind. Fill out the FAFSA. There is nothing to be afraid of. It is free money you are getting.”

“Even if it doesn’t cover everything, it might cover some of the cost. It depends on your income and your parent’s income, too,” adds Rashid.

“This is for the students who don’t have money to pay for college. It helps them get a chance to go to college and succeed in life. I think everyone can achieve their goals and dreams if you stick to it and do what is right.”

Rashid will be attending Columbus State University and plans to study medical engineering or another medical field. “I’m good at science and math,” he says. He hopes to play soccer in college, too.